Reliability of colposcopy and circumstances that warrant concern

Both microinvasive and frankly invasive squamous cell carcinoma is tissue that has proliferated and transformed, altering cervical surface configuration and causing the formation of exaggerated, contorted, and unusual blood vessels to support tumor growth. Surface contour and blood vessel patterns are reliable indicators of disease progression, but they are not always typical. Although many authors report that colposcopy is of value in detecting early invasive disease, the same authors report a significant problem with inaccuracy of colposcopic diagnosis.

It is difficult to diagnose microinvasive cancer by colposcopy, particularly when it is small and focal. Many times these lesions are hidden in large, especially severe, CIN3 lesions. Yet, sometimes there is no way other than careful histologic examination to tell that a small focal area has extended beneath the basement membrane less than 3mm. This diagnostic error is particularly likely to occur when no coexisting warning signs of cancer are observed.

Although microinvasive and invasive cervical carcinomas are often assumed to demonstrate progressively more abnormal findings on a continuum beginning with preinvasive disease, published evidence does not support this assumption. The most severe lesions do not always demonstrate the most abnormal colposcopic findings. Likewise, a lack of abnormal colposcopic findings does not always indicate an absence of cervical pathology.

It is essential that all individuals practicing colposcopy on patients with abnormal cytology learn to recognize the colposcopic signs of microinvasive and more advanced disease. Additionally, it is important to be familiar with the clinical and etiologic predictors, such as age, cytology, and location of disease.

Approximately 70% to 75% of women with a Pap showing HSIL will have underlying CIN 2 or 3, and about 1% to 4% will have invasive cancer. Unfortunately, many of these women have unsatisfactory colposcopy, and cancer usually cannot be excluded without conization. 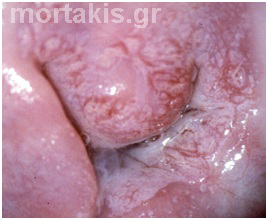 Cancer of the cervix is rare in patients younger than 25 years. The incidence of microinvasive and occult invasive cancers increase as women grow older. For every 100 CIN3 cases, 3 (3%) of the cases will be discover to have cancer. Two percent to three percent of CIN3 lesions will have a glandular component. Patients with malignant cells on cytologic testing require immediate colposcopic assessment and excision when colposcopic biopsy does not confirm cancer. Also cytologic severity should be considered in connection with the patient’s age. Markedly abnormal cells in a patient 40 years or older should suggest cancer to the colposcopist.

The size of a CIN3 lesion with associated invasion:

On average, seven times larger than that without invasion.

Long linear CIN3 lesions (>10mm), particularly when there is endocervical involvement, are always suspicious for cancer. As the surface area of lesions increases to more than 40sq mm, so should the suspicion for cancer (figures 77, 78, 79). 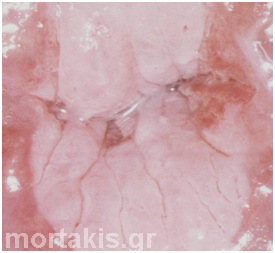 Figure 78  Large HSIL entering the cervical canal. Possibility of microinvasion or even invasion: 2-7%. 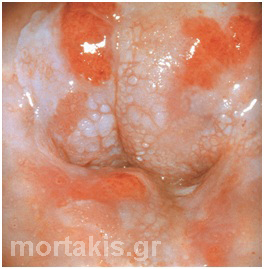 Missing Cancer is the most serious error made in colposcopy. Circumstances that warrant concern are:

Color: Dense acetowhiteness is a distinct colposcopic feature of either high-grade SIL or the presence of keratin. Keratin is associated with malignancy and is also seen in condylomata and in post treatment states. The degree of whiteness in neoplasia is a reflection of the amount of nuclear activity. Visualization using a blue or green filter often reveals punctation or mosaicism and white epithelium after the application of acetic acid (figures 36, 81, and 82). HSILs are usually dense white. Squamous cancers can be yellowish, a characteristic associated with necrosis. A red color reflects marked vascularity (figure 83).

Atypical vessels: In microinvasive and most frequently in invasive cancers the punctuate and mosaic patterns become degraded and disorganized as if the vessels are breaking out of the typical arrangements and transmuting into more atypical vessels. These formations are commonly referred to as corkscrew, spaghetti, comma, tendril, and waste-thread depending on what they resemble. Other atypical forms have non-branching vessels that bulge and constrict, exhibiting variable calibers. They sometimes appear within an area of uneven surface contour because these vessels are supporting active proliferative tumors (figures 30-34, 84, 85).

It is top priority for the colposcopist to keep in mind the warning signs of invasive cancer:

Besides figures 79-85, cases of invasive cancers are presented in figures 86-90. 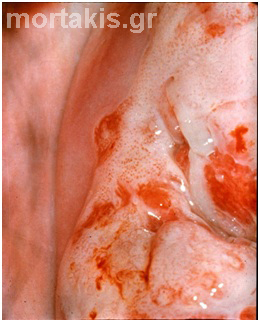 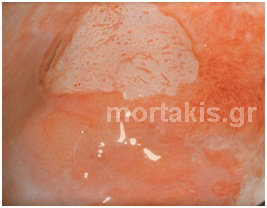 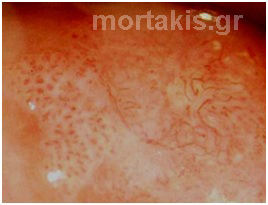 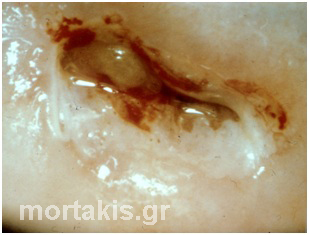 Figure 87 This case of invasive cancer is not so impressive colposcopically. A HSIL is seen at the posterior cervical lip. The fragile bleeding epithelium around the cervical of is suspicious of invasion. 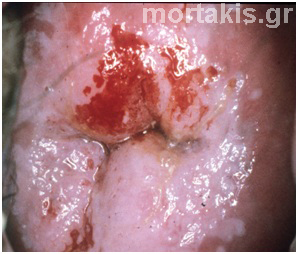 Figure 88 The HSIL occupies the whole cervical surface and enters the canal. Hemorrhagic mass above the cervical os. Invasive cancer. 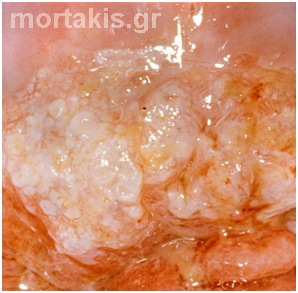 Figure 89 Keratin formation. Irregular surface  and contour of the lesion above the cervical canal. Plaques of mosaic on the left of the picture because of the atypical vessels under the keratin plaque. Invasive cancer. 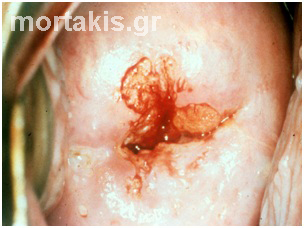 Figure 90 There are no specific colposcopic features in this case of invasive cancer, except for the yellowish necrotic tissue and the fragile bleeding epithelium around the cervical os.

In summary, the accurate colposcopic diagnosis of preclinical invasive carcinoma depends on several factors: continuing alertness on the part of the colposcopist, strict adherence to the step by step approach to examination, the use of a grading index, close attention to surface blood vessels, the honest appraisal of when an examination is inadequate, the appropriate use of ECC (endocervical curettage) to rule out lesions in the canal, and the taking of multiple well directed biopsies of sufficient tissue on which to base a reliable histopathologic diagnosis. In “suspicious cases” (for example previous cytology suspecting invasion) colposcopists must not rely on negativity of colposcopically taken biopsies. They must proceed to conization.