Grading systems for colposcopy are systematic methods for predicting colposcopically the severity of lesions by discriminatory analysis of unique colposcopic signs. Aggregate colposcopic signs are more accurately predictive of the clinical severity of cervical disease than individual signs. Attempting to grade lesion severity solely based on the prominence of the acetowhite reaction or by the mere presence of aberrant vessels is unreliable. The colposcopic pictures in figures 91-94 show 3 cases without correlation between impressive colposcopic view and severity of the lesion. 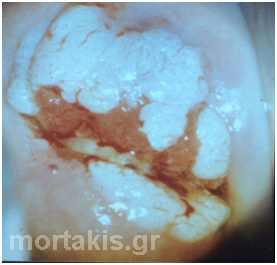 Figure 91 Exophytic condylomata of the uterine cervix. Dense acetowhiteness (though snow-like white), irregular contour without the typical for condylomata micropapillary surface. It would be better to proceed to excision of the transformation zone with a swallow LEEP, in order to have histologic examination. 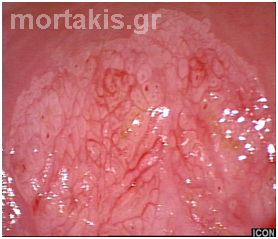 Figure 92 Attempting to grade this lesion’s severity solely based on the mere presence of aberrant vessels is unreliable. Abnormal vascular features such as punctation and mosaics are significant only if these are seen confined to dense acetowhite areas with distinct margins.  Histology showed a CIN1 lesion. 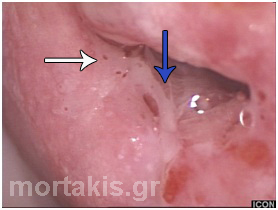 Figure 93 Mild acetowhiteness of the lesions shown at the posterior cervical lip (from 3 o’clock to 6 o’clock positions). To the experienced colposcopist, metaplastic epithelium is not organized in an orderly way (see figures 44-46). The end of the atypical metaplastic epithelium towards the canal (new squamocolumnar junction) has well defined margin (blue arrow). There is also an external lesion margin (white arrow).  No vascular patterns are present. Histology of the biopsies proved CIN2. 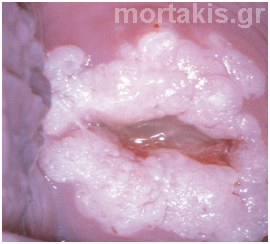 Dr Malcolm Coppleson devised another grading system in the 1960s, focusing attention on color and density of acetowhitening (grade I to III acetowhitening).

In 1985, Dr Richard Reid described the use of a new and less subjective colposcopic index to differentiate LSIL from HSIL. The Reid’s Colposcopic Index (RCI) considers four colposcopic signs, which are:

Margins of the lesion

The nature of a lesion margin, edge, or border varies depending on the severity of cervical neoplasia, making it an excellent indicator of the degree of cervical disease. Low-grade lesion (CIN1 or HPV) margins may be irregular, flocculated, feathered, angular or “geographic”, indistinct, exophytic or micropapillary (condyloma-like) in contour or surrounded by small “satellite” lesions. A score of 0 points is assigned to the lesion if these attributes are present (figures 5, 8, 18, 20, 38, 44, 48, 50, 52, 54-59).

High-grade lesions, especially CIN3 may have raised, peeling epithelial edges. Distinct lesions encompassed within a larger lower-grade lesion and located closer to the squamocolumnar junction may have an internal border that demarcates the area from the surrounding low-grade change. Lesions with peeling edges or internal margins are likely to be CIN3 and thus receive 2 points for their margin score (figures 11, 41, 66, 67, 95 and 96). 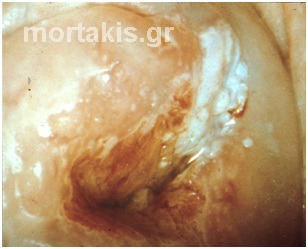 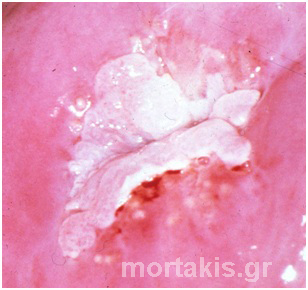 The color of the lesion following the application of 5% acetic acid solution determines the second colposcopic sign. Low grade (CIN1 or HPV) lesions are semitransparent, nearly translucent or have a shiny snow-white color. These lesions are assigned 0 points for color (figures 6, 7, 8, 18, 20, 38, 39, 48, 51, 53, 59).

CIN3 lesions appear a dirty oyster-gray or very opaque in color after application of 5% acetic acid solution. These lesions appear opaque white because the nuclear dense tissue of the lesion reflects much of the colposcope’s light. They are assigned a score of 2 points for color. The opaque acetowhite color also persists for a longer period of time than does the translucent acetowhite color of CIN1 lesions (figures 9-11, 40, 41, 47, 65-68, 78, 95, 96).

The following type of lesions indicates a score of 0: Areas of fine punctation or fine mosaic, ill-defined, yet prominent vessels formed by loose aggregations of nondilated capillaries of uniform caliber. These vessels represent normal intraepithelial looped capillaries that have been exaggerated because of a proliferative effect due to HPV infection (figures 19, 20, 38, 44, 56, 59).

The following type of lesions indicates a score of 1: Most CIN2, 3 lesions do not display abnormal surface vascular patterns when dilute acetic acid is applied. Conversely, when the colposcopic examination is performed with saline, these same high-grade lesions have abundant epithelial vessels. This disparity suggests that the application of dilute acetic acid soaking to a high-grade, nuclear-dense lesion causes enough epithelial swelling to transiently compress most intraepithelial looped capillaries, preventing them from being visualized (figures 9, 10, 40, 41, 61, 69, 71-73, 78, 96).

The following type of lesions indicates a score of 2: Coarse, dilated punctation or significant mosaic vascular patterns. These vessels are confined to significant plaques of acetowhite change, dilated, and arranged in sharply demarcated, well-defined patterns (figures 17, 21-24, 74-77, 80, 85, 86).

The following types of lesions indicate a score of 0: Uniform iodine uptake (positive staining) by intracellular glycogen deposits within well-differentiated epithelium. The chemical reaction between glycogen and iodine produces a deep mahogany-brown color. An area of epithelium that was recognizable as a minor-grade lesion on the three acetic acid criteria (because it scored <3 points) but failed to stain mahogany brown. Histologically, most such lesions represent areas of parakeratosis, without the rich intracellular glycogen stores normally found in benign vaginal mucosa. Despite the absence of intracellular glycogen, the surface keratin deposits in such lesions do retain enough iodine to stain a mustard-yellow color. This pattern is called negative iodine staining (figure 48).

The following type of lesions indicates a score of 1: An irregular mixture of iodine uptake and iodine rejection, imparting a variegated, tortoise-shell appearance. This pattern, termed partial iodine staining is typical of low-grade dysplasia (figure 60).

The following type of lesions indicates a score of 2: Mustard-yellow staining in an area that was already recognized as being high grade by the three dilute acetic acid criteria (figure 47).

It is important to understand that the negative iodine staining seen in both trivial and major lesions is characterized by the same yellow discoloration. Hence, determining whether a focus of negative iodine stain attracts 0 or 2 points depends on the application of other colposcopic features, not on the shade of the iodine reaction.